From the Record Journal Newspaper: "Wallingford’s looming budget vote could leave some residents in a pickle"

"The council voted 9-0 to approve a change in Mayor William W. Dickinson Jr.’s proposed budget that would allocate $60,000 to convert the four tennis courts at Harrison Park into eight pickleball-only areas. 'We have the money, so I would defer to the Parks and Recreation Commission to determine where (pickleball courts) would be best suited for the town,' Fishbein said."

Please be advised that the vaccination site at Oakdale Theatre is taking walk-ins for COVID-19 vaccinations. 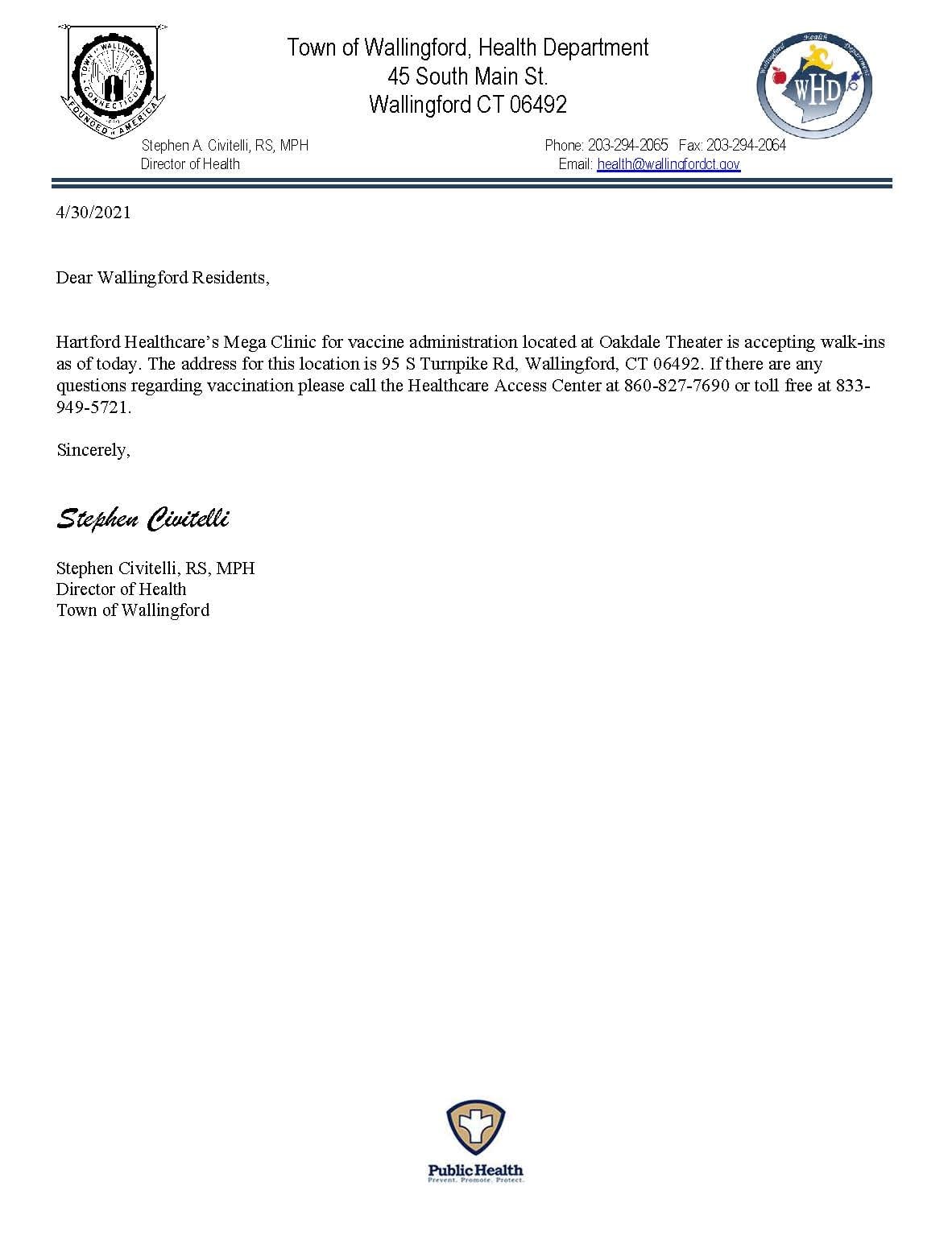 "WALLINGFORD — The Town Council wants to strengthen local littering laws to impose fines on people who dump household or commercial garbage into public trash receptacles. The Town Council voted unanimously at an ordinance committee Thursday to advance to a vote of the full council changes to the town’s littering ordinance ... The council also discussed the proposed ordinance changes at an ordinance committee meeting in December. Councilor Craig Fishbein asked during the meeting who was empowered to go through trash bags dumped in town receptacles to identify the person. Town Corporation Counsel Janis M. Small replied that once the trash was deposited, it belongs to the town. Public Works would ask the police to go through the trash, unless someone else was designated."

While some want to "defund the police," I do not. Many do not know the sacrifice that they and their families go through, not knowing whether or not they or their "family member in blue" will return safely at the end of their shift. Thank you, Wallingford Police Department for your efforts in keeping us safe. #BackTheBlue

Editor: During the pandemic, various individuals have sought my help as a private attorney, to fight for their rights. Last spring, as a result of my legal representation, the federal courts ordered Governor Lamont to repeal his unconstitutional executive order that totally shut down the process to apply for a firearm permit. The governor complied within days, and that process was restored.

A few months ago, our attorney general agreed to vacate thousands of dollars in fines levied against one of my clients, a single mother with relatively no income, when it was proven that portions of the governor’s travel ban were legally unenforceable.

And, just a few weeks ago, as a result of our case which successfully challenged the legal process by which the governor mandated the wearing of face masks (as opposed to the general wearing of facemasks, no matter what my political opponents may claim), the court ruled his procedure unconstitutional, thereby causing the legislature to convene and vote to re-taking its position as a co-equal third branch of our state government.

As with representing my clients, as an elected official, I have fought for the principles of smaller government, lower taxes, and less interference in the day-to-day affairs of our law-abiding citizens, and that fight is apparently never-ending. With that in mind, I recently filed papers to run, once again, for a seat on the Wallingford Town Council, and have created a website for the campaign: www.fishbeinforcouncil.com.

Please know that I will not be accepting donations for this campaign. I respectfully request that any money you would consider donating you instead use to take your family out for a meal at one of our fantastic local Wallingford restaurants. They are the lifeblood of our local economy, and could use your support. Now, on to November!

From the Record Journal Newspaper: "Wallingford’s looming budget vote could leave some residents in a pickle"